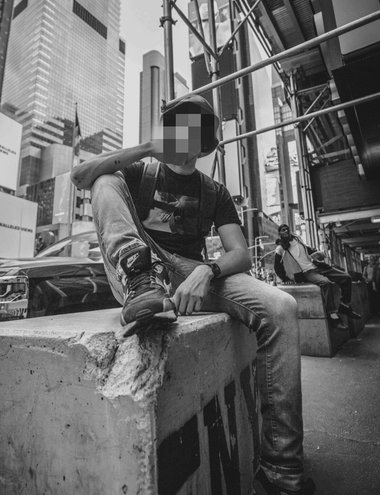 Conse is a multidisciplinary, self-taught plastic artist based in Barcelona. From a very young age, Conse has been part of Hip Hop culture.

At the onset of his career in 2007, he began using different firms in the world of graffiti, while also developing as a music producer, Master of Ceremonies (MC) and DJ.

During 2008 and 2009 he established CONSE, the firm with which he has developed his entire professional career in the art of graffiti. This marked the introduction of a self-discipline that until then did not exist and continues to investigate further the operation and history of this art.

During 2009-2010 he lived in a village outside Barcelona, where he began activities with other artists in the surrounding area, such as interventions in abandoned spaces such as factories, party walls and train tracks.

Next came collaboration with institutions in public spaces where activities related to the culture of graffiti were carried out, along with helping the initiation of other artists.

In this period he created his own technique in letters as well as adding elements of realism which he would develop in the future.

At the end of 2010 he returned to Barcelona where he continued his artistic activity.

Between 2012 and 2013 he partially ceased his activity on the street and focused on the development of the technique of realism in charcoal, oil, acrylic, spray, among other techniques of the plastic arts that he would later take back to the streets of Barcelona and other cities, both national and international.

2014 is a year that marks a radical change in his career as he returned to make pieces on the city walls. Applying the technique of realism evolved with its own style that continues to improve day by day.

Since then Conse has been travelling throughout the Iberian Peninsula, Europe, and North America participating in various events and exhibitions related to urban art, with a future projection in the realisation of big walls while making his own works for collections and private exhibitions.